Is Stevia Safe? Side Effects and Benefits: The Truth May Shock You 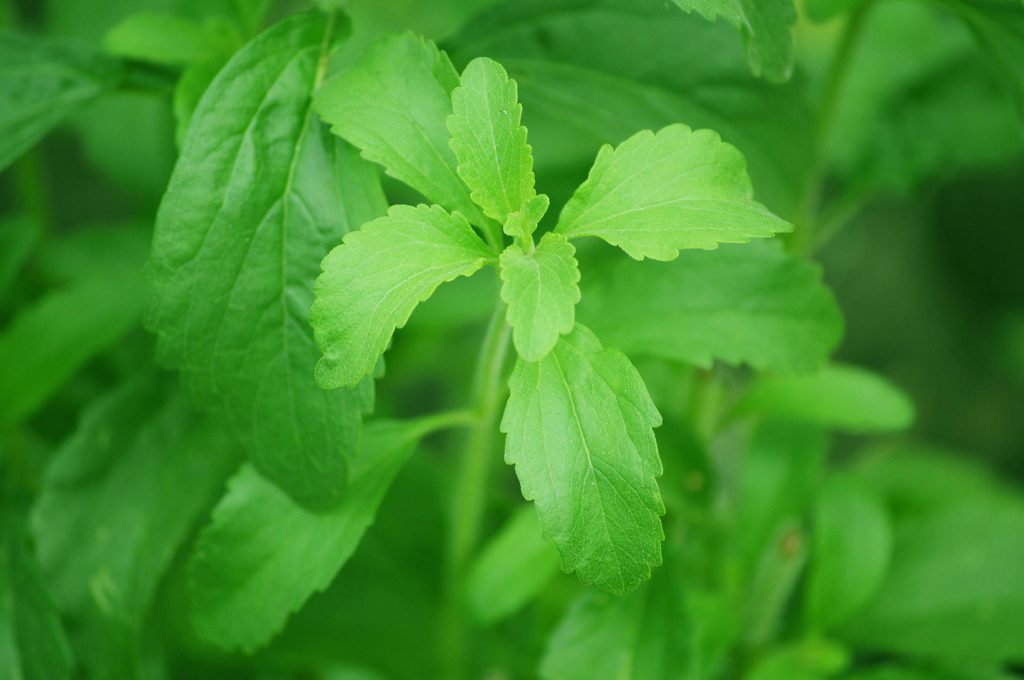 As the world wakes up to healthier options and new alternatives to traditional ingredients, more of us than ever are reaching for sweeteners over sugar as a dietary addition.

Sweeteners have fallen in and out of favour with the public over the years, as attitudes and appetites have moved toward natural ingredients over artificial ones.

This has seen the rise in the popularity of Stevia and other natural sweeteners to give a dose of sweetness which isn’t full of the calories that sugar is.

It may be several times sweeter than sugar, but there’s more goodness to Stevia than you’d guess.

Stevia may be natural, but is Stevia safe?

And why would you bother changing up sugar for sweetener when you (hopefully) aren’t consuming too much of it anyway?

So, let’s investigate this sweet stuff and find out the ins and outs of Stevia once and for all!

What is Stevia, Anyway?

Stevia, or Stevia Rebaudiana, as it’s technically known, is a plant not dissimilar to a chrysanthemum.

The plant contains steviol glycosides, which are compounds with a taste 30-100x sweeter than sugar (impressive, right?!).

Steviol glycosides don’t metabolise in the body, so unlike sugar, contain no calories.

Stevia, as a plant, has been grown for over 1,500 years in South America.

The leaves have been used as sweeteners for hundreds of years in both Brazil and Uruguay.

Take a Look at the Label! Not All Stevia Products are the Same

Shop-bought sweeteners often contain a highly-refined Stevia leaf extract, rather than just the leaves themselves due to the fact that Stevia is SO sweet.

The extract is called Rebaudioside A; or Reb-A for short. Reb-A is a whopping 200 times sweeter than sugar, so it’s usually blended with dextrose and/or erythritol, and sometimes natural flavourings.

Stevia sweeteners are available in a multitude of different forms and contain a variety of different additives.

Some of these additives are questionable.

There are completely natural and minimally processed Stevia products out there, but it’s worth checking the label on anything you buy before you consume it, to be sure it is what you think it is.

Nutribuddy shakes contain a pure form of natural stevia, without any nasty additives.

By using pure natural stevia, Nutribuddy products benefit from the lovely taste and health benefits with none of the drawbacks associated with un-pure forms.

Let’s Cut to the Chase: Is Stevia Safe?

Stevia is natural, but we all know that something being natural or organic doesn’t necessarily make it safe.

The active compounds within the plant, steviol glycosides, have been approved for human food and drink consumption by the FDA – the federal department of the USA which gives guidance on food safety and permits ingredients to be made commercially available.

The FDA, Scientific Community on Food (SCF) and European Food Safety Authority (EFSA) have all defined the acceptable daily intake of Stevia as dependent on your body weight, at no more than 1.8mg per pound of body weight.

However, the safety guidance on Stevia relates to the readily available Stevia sweeteners containing Reb-A extract and not just Stevia leaves.

There’s been little to no research into the safety of Stevia leaves alone, and so, there is yet to be published guidance specifically on these.

It’s best to use caution and a bit of common sense if you’re growing your own and consuming them.

Stevia Side Effects: Something to Worry About?

Stevia benefits far outweigh Stevia side effects – but as with any food ingredient, it can affect people differently.

A key concern of Stevia products is what’s added to the plant to create the sweetener.

When made with sugar alcohols, some people with pre-existing sensitivities may experience bloating, stomach ache or digestive problems as a result of their consumption.

This isn’t a Stevia side effect as such, but rather a side effect to other ingredients within Stevia products. Those sensitive to sugar alcohols can bypass any negative side effects by selecting a product with no erythritol included.

The only evidence of any side effects caused by the consumption of Stevia comes from a clinical study that took place in 2015.

It reported a potential link between regular Stevia intake and a disruption in the chemical make-up of the intestines; both positive and negative.

However, this was a standalone study and the findings seem not to have been repeated anywhere – so further tests are needed before anything can be confirmed.

Of course, if you knowingly have an allergy or sensitivity, be careful when consuming Stevia. But if you don’t, there are plenty of Stevia benefits to be enjoyed – most of which, you probably haven’t heard of before!

There’s a real misconception around Stevia.

Many believe it’s inherently unhealthy because it tastes so sweet, but this isn’t actually the case – this plant packs a punch nutrition-wise!

Sugar intake can be a real concern for those with diabetes, but Stevia is a ‘non-nutritive sweetener’.

This means it gives all of the sweetness (if not more!) of sugar, without plying the consumer with calories.

In fact, there have been a few studies that indicate Stevia can help maintain a healthy blood sugar level in those with Type 2 diabetes.

These studies have drawn several conclusions around the function of Stevia in mediating glucose levels.

One trial (on rats, not humans) indicated that Stevia decreased levels of blood sugar of up to 5, compared to the results achieved by consuming a balanced diet.

Another, this time with humans, gave favourable results for diabetics when consumed alongside meals, in reducing unhealthily high blood sugar levels to a more reasonable level.

Stevia can make a fantastic sugar alternative to those suffering with diabetes, but it’s worth finding the most unrefined Stevia product possible, as some of the other additives found in sweetener products could have undesired effects on blood sugar fluctuations.

Stevia is Great for Weight Control

Excessive sugar consumption is often cause for weight gain… but hey, who doesn’t fancy a sweet treat once in a while?

Stevia can sweeten food and drink without adding additional calories to it, so a bit of sweetness can be enjoyed without consuming anything nutritionally extra.

In this respect, one of Stevia’s best benefits is that it doesn’t just help curb sweet tooth cravings, but can also help avoid the need for snacking and additional unhealthy intake throughout the day.

This all said, it remains important to remember that Stevia isn’t a miracle tool to weight loss. Instead, it’s one tool to hold in your armoury alongside a well-balanced diet, perhaps a weight loss shake and lots of activity and exercise.

Stevia is Far Better for Your Teeth!

When sugar comes into contact with oral bacteria, it ferments.

During the fermentation process, it breaks down into several compounds – one of which is lactic acid. If left in contact with teeth, lactic acid breaks down their enamel and over time causes erosion, decay and cavities.

Stevia doesn’t ferment or break down when consumed, so there’s no lactic acid to worry about coming into contact with teeth!

Of course, basic oral hygiene should still be carried out as it would be when any food or drink is consumed, but you can rest assured that the Stevia you’re enjoying won’t cause any harm to those pearly whites.

As the world has become wise to the dangers of excess sugar consumption, many of us are taking steps to reduce our intake and are instead turning to sweeteners as a way of sweetening up food and drink.

Sugar and Stevia aren’t your only options, but what’s the healthiest… and which sweetener is safest?

Of course, opinions vary between nutritionists, dieticians and health professionals on what constitutes the ‘best’ sweetener, but there’s some that are widely agreed upon as a good option.

An easy way to sweeten up food and drink without consuming any empty calories is to add frozen or fresh fruit.

Although not as nutritionally complete, natural flavourings such as vanilla or almond can also be dropped into food or drink to alter their taste.

However, these all require you to have these ingredients in the house or on you, so they’re not always the most convenient sugar alternatives.

More natural sugar forms do offer some additional nutrients to straightforward sugar, so should be consumed if available as an alternative.

Agave nectar is often touted as a safe alternative to sugar for those with all types of diabetes, but provides fewer nutrients than honey or maple syrup.

It contains the same amount of carbohydrates as table sugar, but is sweeter, so you need less of it to give a sweet flavour.

Erythritol, the sugar alcohol often added to Stevia sweeteners, can also be bought and consumed as a standalone sweetener.

On its own, it’s absorbed into the body but later expelled with no change, so has little impact on the body as a result of consumption.

However, many people suffer with sensitivities to sugar alcohols, and so, may experience negative side effects from erythritol.

Which Sweetener is Best?

When you line it up alongside other sweeteners, there’s no doubt about it – Stevia’s benefits and organic nature trumps all of these for convenience, calorific intake and taste!

So, it does seem like the obvious choice if you want to enjoy sweet treats but stay healthy and fit.

Stevia has been grown and cultivated for centuries for its health and medicinal properties and it remains a favourite today.

Its rich history means that it has been well studied and tested, with health benefits scientifically proven, including Stevia’s influence in removing plaque build-up in arteries, lowering blood pressure and reducing cholesterol.

What’s more, a little goes a long way – just a pinch is the sweetness equivalent of over a teaspoon of sugar, so you need only a small amount to carry about with you to get flavouring.

When you understand all of this, it’s really no surprise that Stevia is so popular!

Now that we know more about sugar, we understand better what a great treat it makes occasionally – but lots of us are making a move toward consciously cutting our intake (or in some cases, eliminating it altogether!).

Thankfully, there are lots of sweeteners out there which make great alternatives to a spoonful of sugar and give the desired taste boost, without the calories and risks of tooth decay.

Whilst there are plenty of options, we, as always, advocate making an informed decision on purchase and consumption before you make any dietary choices.

We recommend reading up on the different ingredients and additives within sweeteners before you buy one; and having already done the legwork for you, we waste no time in recommending Stevia as the easiest and healthiest option!

The health benefits of Stevia are plentiful and varied and have been proven time and time again in studies; enough for the ingredient to be endorsed by the American FDA.

This makes Stevia the perfect accompaniment to your drinks, baking, treats and meals to sweeten them up whilst still helping you maintain the nutritional balance you need to ensure your body takes in all of the vitamins, minerals and nutrients it needs for optimum performance, good health and the maintenance of a healthy weight.

We opted to use Stevia to sweeten up our wholefood-packed, vegan shakes. 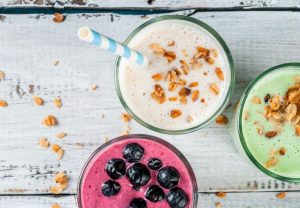 Nutribuddy Pure Shake is a delicious shake comprised of wholefoods which are bursting with nutrients: gluten-free oats, dates, chia seeds and ginger to name a

Add over £30’s worth of products to your basket (including any discounts). Add the stainless steel scoop to your basket. On the basket page click